The first ever  Chongqing dog female  to make an appearance at an European 63rd international dog show was named Black Rose , who took BOB and CAC in NOV. 2018 …

When Chongqing Dog breed was presented to the public in the dog-magazines such are CKU Standard , ZOV , Modern Molosser ,Wikipedia  photos of our Black rose Bamboo tail were most used as perfect example of the breed.

other our dogs on CKU – Chongqing Dog STANDARD Cover …

BRIEF HISTORICAL SUMMARY: The history of this breed can be traced back to Western Han Dynasty (BC 202- AD 8), more than 2,000 years ago. Archaeologists found a huge Western Han Dynasty’s graveyyard in Jiangbei area of Chongqing on 20th April, 2000. A large number of dog pottery statues of their kind were found. Some of them served the purpose of being protector Gods to accompany the tomb of the noble family in spirit. This ancient breed was prevalent in Chongqing. It’s direct ancestor is the native breeds from the adjacent regions of Dazhu, Hechuan, Yongchuan, Lingshui and Guanan and collectively called as Chongqing Dog. They were developed for hunting in the mountain area of East Sichuan. Chongqing Dog lost their major purpose due to the urbanisation and their population declined rapidly. The restoration of the breed was undertaken successfully not until 70’s. They become a popular utility dog in Chongqing since then.
GENERAL APPEARANCE: They are loyal, intelligent, courageous, agile species. Chongqing Dog are medium-sized dogs, square -built, great strength for his size and muscular. Their body are covered with short harsh coat. From the withers and the spinal column is sparsely furnished with coat radiating to 3 cm on each side and extending lengthwise including the croup, above the tail from the root to its tip.

IMPORTANT PROPORTIONS: The length of skull and the length of the muzzle approximately 2: 1. Height to elbow about half height at withers. The female can be slightly longer than the males.

BEHAVIOUR AND TEMPERAMENT: Guardian of property and family, fearless, muscular, tough and agile. In the past, it has been used for hunting.

HEAD: Muzzle should be as broad and powerful as possible. The dark mask is confined to muzzle and must be in sharp contrast to the colour of the head.

CRANIAL REGION:
Skull: The skull is flat between ears. Square on top. Natural wrinkles on top of the skull.
Stop: Well defined.

Forehead: The forehead forms a distinct stop with the bridge of nose. Slightly loose and fine wrinkles without excess on the skull. 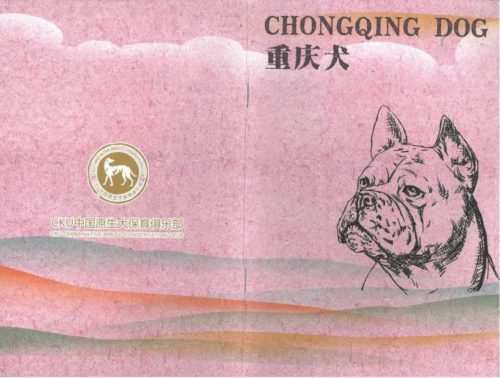 Muzzle: Strong, square, noticeably shorter than the skull. Broad from root to tip of the nose, not snipy, with moderately obvious folds. The line of the muzzle forms a very obtuse angle upwards.
。
Cheeks: Prominent, due to the strong development of the muscle.

BODY: Moderate wrinkle on the withers.The body is somewhat longer than the height at the withers.

Topline: Slightly fall behind shoulders, rising above the level of the croup.

Chest: Wide, prominent and deep reaching the elbows. Depth of chest is half the height at withers. Well let down between forelegs.

Underline and belly: Without excessive tuck-up. 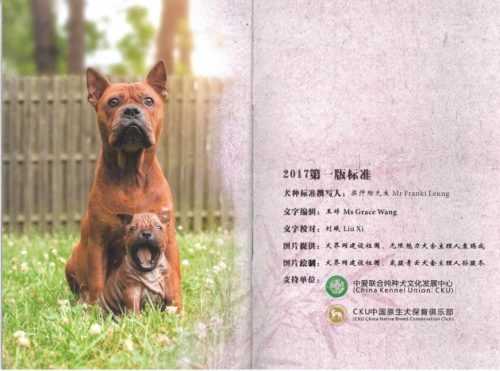 TAIL: Tail set high, stay straight stiffen and carried high. Moderately long, round at base and tapering to a fine point.

~Shoulder: Well laid back, not loaded.

~Elbow: Firm, turning neither in nor out.

~Forearm: Forelegs straight and upright well under the hound, good substance and round in bone, not tapering off to feet.

~Hock joint: Firm, well let down and parallel to each other. 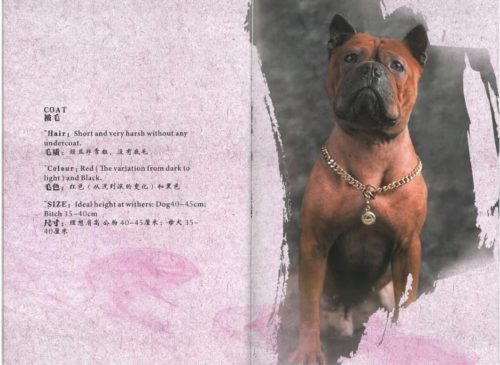 GAIT/MOVEMENT: Robust and powerful . Back level, firm with no indication of roll. Stride free, reaching in front and straight without high action. Should not move close behind nor paddle nor plait in front.

Hair: Short and very harsh without any undercoat.

Colour: Red ( The variation from dark to light ) and Black.

Any departure from the foregoing points should be considered a fault and the seriousness with which the fault should be regarded as exact proportion to its degree and its effect upon the health, welfare of the dog and its ability to perform its traditional work.

~ Any dog clearly showing physical or behavioural abnormalities shall be disqualified.

~ Only functionally and clinically healthy dogs, with breed typical conformation should be used for breeding. 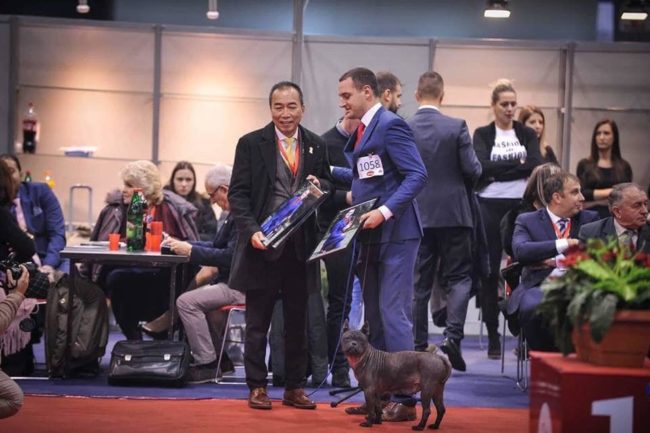