Why did this CKU ? 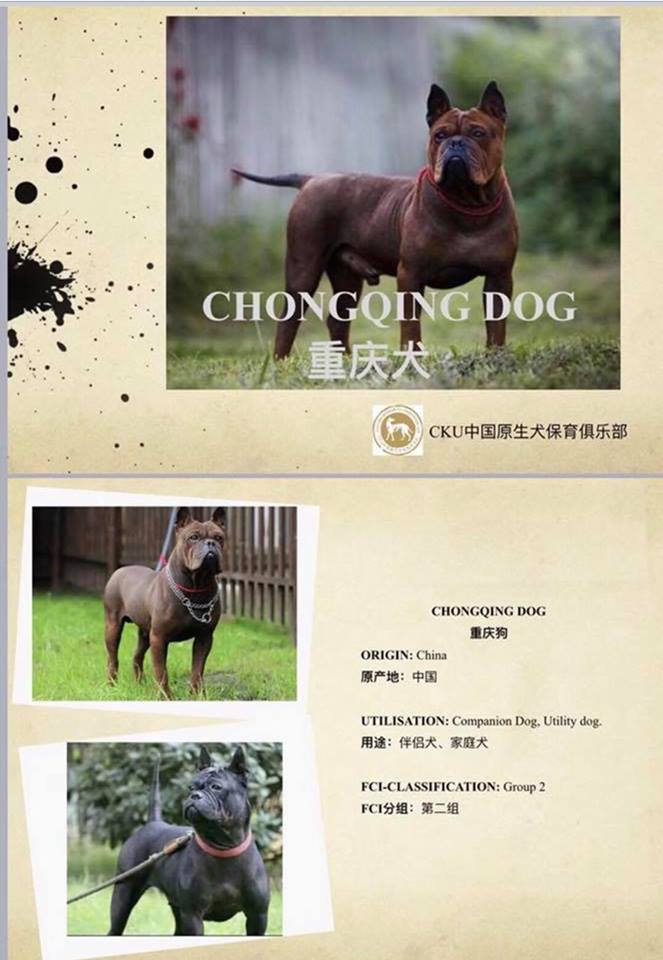 Simple , over the years the Conservation Center created a new breed a Hybrid type  of Chuandong Hound and Chongqing DoG, 3 sizes of these dogs , brindle , black tan  and white…. and many others cross mixes with Dogo Argentino, Rottweiler, French Bulldog, traditional Shar Pei …It was high noon to save approximately 800 pure CQ dog in 2017  . My personal opinion is that the dog mill broker re sells Hybrids as pure Chongqing dogs to make a lot of lucrative business with European clients , Most of the European  breeders order CQ dogs online without seeing and comparing the differences of Hybrid and ancient type CQ dogs , there was no pedigree or any other relevant document of Origin exchanged . Between 2014 -2017 the Conservation Centers bad profit only focused breeding  was diluting the breed as there are so few true bloods cross breeding and inbreeding is occurring. The knowledge of the exact breeds that contributed to the original Chongqing Dog were lost years ago . From 2014 – 2017 was the time of the Puppy Mill broker . And the worst part of it was that the CCDC Chongqing dog Club was supporting this kind of breeding .A puppy mill “broker” is a pet dealer engaged in the business of reselling puppies which were bred elsewhere. Unlike retail pet stores  , brokers are middlemen dealers who obtain puppies from breeders and puppy mills, and then transport and resell them. The worst Chongqing dog mill broker was from Sweden and a few from Russia , they just go for quick money making and not caring about  saving or preserving the purity of the Chongqing dog. they told the wrong story about the Origin of the East Sichuan dog , (that the Chongqing dog and the Chuandong hound are one breed and that the City type is the Bulldog type, and the Hunting type is the long muzzled Chongqing dog ) the Situation on the market was like this, Chuandong puppies go for  $80 – $400   , CKU Certificated Chuandong puppies over $1000 ,   Price of ancient Chongqing dog type is up to $3500 for a puppy . the more outstanding specimens were used as status symbols and were almost ornamental in some of the yards in Chongqing,Top adult CQ dogs are over 10,000 US $ – 35,000$ . So dog mill brokers would sell foreigners hybrids because Chuandong puppies were cheap and European clients had no idea what the ancient CQ dog looked like . Temperament, behavior and health are not dependent on colour. The Conservation Center created white, brindle and tan colour CQ dogs.   Colour is a matter of personal preference. Don’t believe anyone who tells you certain colours or size of dog are more desirable, valuable, healthier or better-tempered than others. Inexperienced or disreputable breeders, however, who mistakenly believe certain colours are more valuable sometimes use breeding stock with poor dispositions or health defects in order to produce colours they think will bring more money.   Be sure to examine the parents of your puppy before purchase to make sure they have the quality of health, personality and appearance you want in your CQ dog. Even today many Breeders in Europe ,Russia and the USA are still breeding the Hybrid type made by the Conservation Center. They never even went to China to visit local breeders , they never compared real CQ dogs with Chuandong hounds or cross breeds of both types , they are blindly believing  and following the fake Story told by dog mill broker . They do a really fantastic job , buying for 80-300$ and selling to Europeans for 3500$ . That’s the reality for years . Sadly 99 % of honest hard working Chinese CQ dog breeders don’t speak English and they don’t know how to use Facebook , Google or YouTube ( it’s even forbidden in China ) to spread the truth about the ancient rare Chinese Bulldogge…What I learned from my second China trip                                                                                                                       13 Reputable CQ dog hardore KENNELs breeder from the Chongqing City told me the same Story  ,, is that in the last 10 years, a lot of people from the villages have come to the City and are bringing their hounds  (Hunting Chuandong hound ),“”And there has been a lot of crossbreeding.”  That’s why the Conservation Center  or today Hongya Cave Kennel  with self declared expert from Sweden  Tim Taylor  offers on the dog market 3 sizes of  CQ dog from XXL to S , white Chongqing dog , black tan and brindle Chongqing dog , ?? yes this is reality by Hongya Cave KENNEL. Black Chuandong hound ? they create whatever the dog market wish to get . Guarantee for only 3 generation purebred ? waooo…Definitely  wrong and dangerous for the purebred CQ dog.  Chongqing dogs screenshots tell all about the Conservation Center purity of Chongqing dog, I have personally visited the Conservation Center , there is nothing what we believe in the western world , dog fights , puppy mill , and is absolutely not an ethical breeding environment  …